The history of Liverpool charts the most extraordinarily rapid rise from obscurity as an insignificant fishing village to the proud position, at its peak, of a colossal commercial city, the most important other than London in the British Empire. Liverpool began on the banks of a tidal pool which ran inland from the River Mersey. The mouth of the pool was roughly where the Albert Dock is situated and flowed inland (where Canning Place is located) for about a mile to where the entrance to the Birkenhead Queensway tunnel is today. The earliest records of Liverpool were taken from the writings of Ptolemy (90 – 168 AD) who referred to Liverpool as ‘Portus Segantiorum’. Evidence suggests habitation by an early race, possibly ancient Britons, Norsemen and Saxons. Norsemen held rule in Liverpool for some time giving origin to many local place names such as West Derby (“Wild Beast”).

A contemporary woodcut of the Battle of Marston Moor.

Although one of the earliest mentions of Liverpool in the Doomsday Commissions had recorded a few huts surrounded by marsh land and forest, by 1089 a village had developed called Lyrpul or Lytherpul. The origins of the name are uncertain and could be taken from Old English, Danish or Welsh and are possibly a descriptive reference to thick muddy water, inlet by the pool, or slope by the creek. In 1207 King John, realising Liverpool’s importance as a port in his planned Irish and Welsh campaigns, created a Royal Charter to officially recognise Liverpool as a Royal Borough. Subsequently on August 28 1207 Liverpool was born. Later in 1235 the Earl of Derby erected Liverpool Castle which stood where the Queen Victoria Monument is today on Castle Street. It was around the time of the English Civil War that Liverpool started to play a national role. In May 1643 Parliamentarian soldiers took the town, erecting defences around it to protect it from Royalist attack. In June 1644 Prince Rupert led a Royalist army of 10,000 to re-capture Liverpool. After repelling the attacks at first, Parliamentarian troops retreated down the Pool to the sea leaving the people of Liverpool to defend themselves which they did fiercely. However they were overcome, with many killed and the town ransacked. But only weeks later Royalists lost the whole North of England (including Liverpool) at the Battle of Marston Moor.

In 1647, as the civil war drew to a close, Liverpool was made an independent port and  received preferential treatment from Parliament over Chester (Royalist city). As a port Liverpool’s strategic significance grew due to the emerging French threat to southern ports. Also wealthy families fleeing London and the south from the Plague brought finance and skills to Liverpool. The city expanded rapidly in the late 17th century with the emergence of the colonies in North America and the West Indies.

In 1712 the world’s first commercial wet dock was built in Liverpool by architect Thomas Steers. Consequently trade increased rapidly. The city’s prosperity and emergence as a major world port was due largely to the proceeds of slavery. From about 1730 Liverpool was transformed from a modest trading village into a major mercantile capital, flourishing on the back of the infamous “triangular trading” of slaves for raw materials.  However, one of Liverpool’s most famous sons, William Roscoe, was a leading campaigner against slavery and, with support from other prominent Liverpudlians like William Rathbone, was instrumental in seeing the trade finally abolished in 1807.

By the middle of the 19th century Liverpool was widely recognised as the second city of the British Empire. Liverpool was also the port of entry for many migrants from far flung colonies making the city one of Britain’s first multi-cultural cities. Architecturally, the city pioneered the vision of emulating the splendour of ancient Greece but had the added influence of its American partners across the Atlantic trade route which set her apart from other English cities. Indeed Liverpool’s growth was directly linked to the development of North America, summed up by an inscription below a statue of Christopher Columbus in Sefton Park which says “The discoverer of America was the maker of Liverpool”. 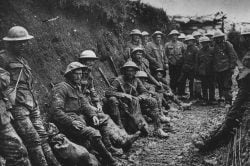 Royal Irish soldiers at the Somme

In the 20th century the two world wars had a marked effect on the city. The First World War claimed over 13,000 Liverpudlian lives. The Second World War had an enormous impact on the urban landscape of Liverpool. Whole streets and many historic buildings were destroyed in the Blitz between May 8 – 15 1941 along with almost 4,000 fatalities.

Liverpool began to steadily decline in industrial significance after the war and during the sixties as shipping was lost to South East regions. However with the emergence of many renowned artists, most notably The Beatles, Liverpool was at the vanguard of the 60s revolution which left an indelible imprint on the world’s cultural landscape.

The turn of the 21st century has seen massive investment into the rejuvenation and development of the city centre, becoming one of the most sought after regions for property. 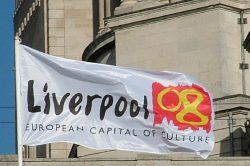 In July 2004 UNESCO awarded Liverpool the status of World Heritage Site, to sit alongside localities such as the Taj Mahal and the Pyramids. In 2008 Liverpool became European Capital of Culture and presided over a spectacular array of events which put the city firmly in the world’s spotlight. Largely due to its unrivalled architecture the city enjoys a burgeoning film industry leading to the nickname the ‘Hollywood of the North’, with blockbusters such as ‘Captain America’ being shot here. In recent years Liverpool One has made the city one of the most prestigious retail destinations in the north of England, while the city’s new liner terminal is expected to bring a massive boost to tourism in the region and further enhance Liverpool’s status as a major northern city.

Through its chequered role down the centuries as a major gateway to the world and a melting pot of cultures, Liverpool has evolved a character and complexion unique to the banks of the Mersey.

Today the city is famous for its sense of humour, its music, its football, its nightlife and for its enterprise and innovation. But Liverpool is probably most proud to be seen as a place of great cultural achievement and endeavour, a city of great generosity and a city of great spirit.